I’m usually not much for documentaries or artsy movies (I didn’t last through the first 15 minutes of Factory Girl), but as a fashion lover, I thought it was only right to go pay respects to the master of the red dress by going to see the Valentino movie. I went in expecting a little insight into the inner workings of the fashion house, but I came out with a feeling akin to having seen a chick flick (one with a bittersweet ending).  It was not simply a documentary, it was a story- a story of success and a story of love.

It started off in the workshop, with seamstresses buzzing around finishing off for the upcoming collection. Then it focused on how Valentino dreamt of this white dress one morning, and we followed it into creation, from whether to add sequinces or not to the runway. On the way, we got to know Valentino and who he is. We got a glimpse of his eccentricities, his insecurities and his humor (he’s a really funny guy!). We felt his passion for his designs and his genius that got him to where he is now. I don’t think I truly appreciated his talents until I saw the creation of that white dress! It transformed from a pretty white dress into a dream. I may have to alter my fantasy wedding dress from Vera Wang to Valentino- the original of course.

Then there was the relationship between him and Giancarlo Giammetti, his business partner. It took us back to Cafe de Paris where they met, we saw them bantering one minute and then the next Valentino would give Giammetti a bracelet for the new years- you can tell that they have a very special relationship. It was especially touching when Valentino mentioned Giammetti in his speech when he received the Légion d’honneur. I was teary! It’s sort of anti climax to find out afterwards from Wiki that they were only together for 12 years and now Valentino is actually dating someone else….

We also saw them preparing for Valentino’s 45th anniversary in the industry in Rome, with an exhibit of his works in the past many years and a fabulous party/show at the ‘Temple of Venus’ at the Imperial forum facing the Colosseum. They illuminated the Colosseum blue and red, with girls in red/white long dresses dancing in the air- it was an amazing show. I especially enjoyed the part when Valentino showed Lagerfeld around and said that they were the two real designers left who made beautiful clothes and everyone else made rags. This celebration however also marked Valentino’s eventual retirement in 2007, after Primero did a hostile takeover of the company. It was a very bittersweet ending, because Valentino seemed so passionate about his art that he didn’t seem like the type to want to retire, indeed he denied retiring throughout the show. If I were him, I’d hate to hand over the brand name that I’d worked 45 years to build over to some strangers! 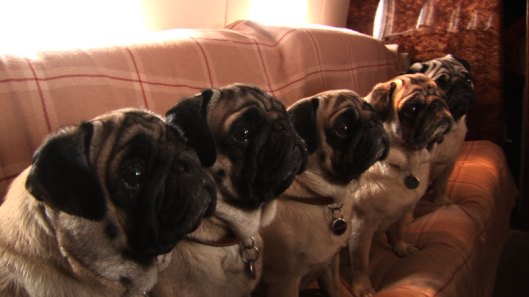 The documentary really changed my view about Valentino. Now I’m loving everything he ever did and I feel very sad that I will never be able to get an original Valentino red dress again (not unless I go vintage). Even his five pugs are growing on me. They have the most sad, soulful eyes, looking up at you.

7 thoughts on “Valentino: The Last Emperor”