Not the most impressive show, but I thought I’d mention it anyway since I’ve always had a weak spot for Chloe. Anyways, Hannah MacGibbon has been doing some serious cramming with the Chloe archives, because I’m seeing bits of the Chloe girl back on the runway. 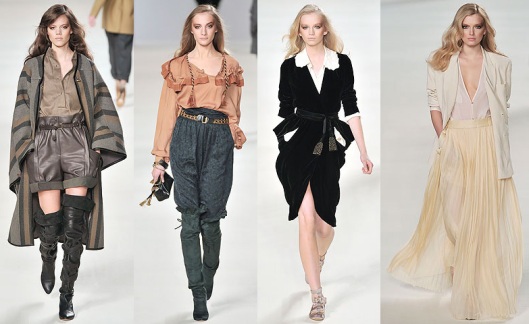 Well, not so much the first part i.e. the first two looks above. There were just too much stuff going on, it looked confused. It needed to be more clean and effortless to be Chloe. Though those thigh high boots (first look) definitely has potential. What I did love was the latter half of the show i.e. last two looks. Doesn’t it look like these two looks are  from a completely different runway than the first two? You can definitely see the Phoebe Philo touch there. The velvet (third outfit) was a good effort on MacGibbon’s part on updating the Philo look- it’s gorgeous! But it looks like MacGibbon still has a lot of work to do to take Philo’s concept to the next level.

As Hiedi Klum says, in fashion one day you’re in and one day you’re out- and Chloe has been “out” for a long time now. So MacGibbon better hurry up and get her act together before we forget who the Chloe girl is!