Forget about scenic postcards. Next time you’re in London, get me one of these as a souvineer- LuLu Guiness clutches! 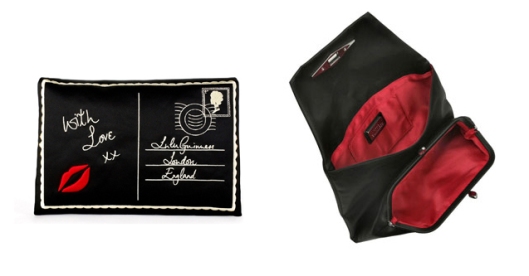 This postcard clutch  is infinitely more useful and chic. It even says London on it! You can’t get more touristy than that. There are many compartments too! Though my cousin has it, and she tells me that she can’t fit much in because it is so thin- just her  iPhone and a few essentials.

I’m usually not a fan of blatant displays of souvenirs (i.e. though shalt not wear your I heart NYC t shirt out in public). But, I think this Union Jack clutch  is subtle enough. The sequins glams it up, don’t you agree?

Not quite as nice as the two clutches above, but this cab clutch is still quite fun. Imagine the cheesy jokes! “Let me grab my cab”

We’re veering a bit away from souvenirs but isn’t this lip clutch so cool? It doesn’t say London as the others do, but it screams London punk fashion.

While we’re on the topic of clutches, I really wouldn’t mind this one either. It would do so well  on a night out. And check out that lining!

So yes, the next time you drop by London, pick up one of these. There’s a flagship store somewhere, but FYI they also have a good size collection at the basement of Harrods- right next to the tax counter!

6 thoughts on “With Love…From London”