Ever since my visit to London in freshman year, I’ve wanted to have tea at the London Ritz. For a big fan of afternoon tea (I’ve even named this blog after it!), it just seemed like the quintessential thing to do. Many years later, after many trips to London, I’m proud to announce that I finally made it last Friday!! 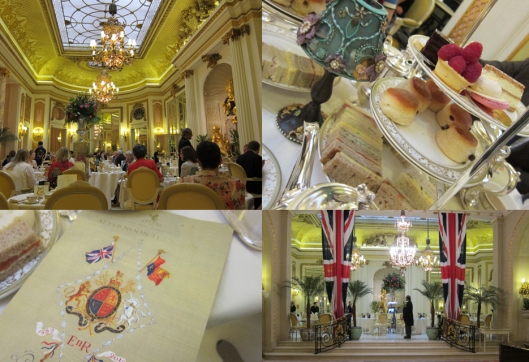 I made bookings over 2 months in advance, and even then, I was left with only an 11:30am slot (and my table of 6 had to be separated into 2, though in the end they were able to put us together) on the Friday morning we arrived (forget about the weekends, I tried the Berkeley and the Carlyle one month ahead and was waitlisted, never to hear back again).

Its was everything I expected it to be. The service was impeccable,  the ambiance was opulent and luxurious and the tea selection was impressive. Even the waiters looked like proper old English butlers! Maybe it is because of the super advance reservations needed, but the crowd also struck me as very “English” as well. I barely saw other touristy looking people in sight! The super advance reservation appears to be warranted though. We arrived to a full scene at 11:30am (seriously, who has tea this early?), and like clockwork, it started to empty at around 1pm and people started to show up for the 1:30pm round!

As for the food,compared to the Mandarin London and the Lanesborough (the only 2 other places I’ve tried in London), it is definitely a cut above the rest. Compared to what I’m used to in Hong Kong, I think there’s room for improvement. Maybe it is just a matter of taste. The sandwiches were ok. The scones tasted just right, though the texture was more breadlike than I am used to. The devonshire cream and homemade jam was delicious though! As for the dessert part, everything was a bit too sweet even for my sweet tooth (or could it be because it is 11:30am in the morning?). The extra pistachio and carrot cake was a good touch. As I said, I reckon the food is all a matter of taste.

All in all, if you love afternoon tea and happen to stop by London, tea at the Ritz is definitely a MUST. It is as important as stop as Buckingham Palace, Big Ben and the Tower Bridge when in London (or even more so!).